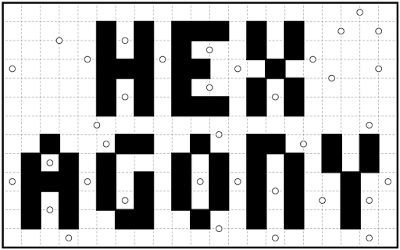 Hexagony, the puzzle contest constructed by Eric Fox and me, has now concluded. Before getting into the results, I want to take a bit of time to talk about the conception process of this contest. If you're not interested, then scroll down a bit for the results and stats. At some point last year, I had the idea to have a contest where half of the puzzles had hexagonal grids as a surprise twist. This was the entire conceit, and the entire point, and I brainstormed about a dozen possible genres that could have the same wording of the rules work for both a standard grid and a hexagonal one. I thought some savvy solvers might guess the gimmick in advance, and PuzzleCraig was actually half right shortly after the first draft of the instructions booklet- instead guessing everything was hexagonal. Kudos to him! I also briefly considered Honey Islands as an inversion- with a surprise square grid- but thought that would ruin part of the surprise and I also really didn't want to make them. This was originally going to be a Puzzle Ramayan style contest- 22 puzzles, 90 minutes, and if it wasn't for the surprise twist being potentially unfair, I would have asked Rakesh if LMI could host again because it went well for Puzzle Zodiac. The other mission statement that I picked up partway through was to make a low-stakes, fun contest that even newcomers could feel comfortable giving a try: given how many new names I saw in the results, I'd say this was a complete success- and without sacrificing the experience for the rest of the solvers, too. One of the biggest successes that I hope to see other contests emulate is the casual entry option- there's a lot of people who just want to solve the puzzles used in competitions without having to sign up and get a 0, or wait until the period is over. I had 34 different people take this option, compared to 95 competitors. But that's getting ahead of myself, a bit.

It took until March of 2021 to decide to really get this into motion, and I reached out to Eric Fox with an offer to help with test-solving and other checking the back-end parts of the process. While I was typing the message, I realized that a collaborative construction process could be a great benefit as our construction styles and strengths differ somewhat, and we quickly realized we had more than enough ideas to extend my original idea of 11 genres out to 15. The construction and testing process went smoother than any contest I've worked on before- Eric was a wonderful partner, and having ever puzzle tested shortly after it was made really helped compared to separating the making and testing processes, and we were done constructing by the start of May. There were only a few ideas that needed to be scrapped- I made a hexagonal Heyawake that was broken from the break-in and didn't realize, Eric had a failed attempt at a hexagonal Star Battle before the successful one that I caught the same day, and I also made a second Spiral Galaxies (the starting image for this post, in fact) for a potential lead-off puzzle, before Eric suggested going with the other one for being more logically interesting. It was obvious in hindsight, but it's hard to be objective about your creations. We then brought in calica, TostCronch, A Sickly Silver Moon, and shyeheya for checking the rules and getting test timings. Of these four I'd especially like to thank calica for continued feedback on administrative decisions and always being there to help check over things that needed checking.

Alright, onto the actual contest results! As I said I would do, some answers were manually given credit despite the written key being incorrect in some small way, if that small way was both obviously incorrect and close to the correct answer. I'll call out all the changes I made below the results table, and include some unadjusted scores if you're against the idea of manual corrections. Additionally, the rules I wrote didn't adequately cover what to do for late submissions- for the future, I'll incorporate a TVC-style penalty for submissions up to 5 minutes late, and anybody more than 5 minutes late is just out of luck. For this contest, I elected to let it slide up to 30 seconds late after the first late submission, and for any later submissions, I would reach out to the solver to determine what was solved last (and thus, late) and not score that puzzle. Again, I'll call out where I did this, but I consider the "Score" column below the true results.

*this submission was more than 30 seconds late, anything solved after this time was not scored, but I do not have an earlier submission time to use

Congratulations to Ken Endo for winning Hexagony and being the only clean finisher of the contest! Also congrats to Freddie Hand and Walker Anderson for scoring 500+, and rob, EctoPlasma and Tiralmo for a three-way tie for 4th at 445. I'm blown away by the fact that this had 95 entrants in total, with another 34 casual participants. Going in, I was anticipating about 25, maybe 50 on the upper end. Thank you to everyone who participated- you all made the extra effort I put in to run this as a contest instead of a stand-alone set of puzzles completely worth it- and I put in so, so much extra effort. The back-end stuff was mostly a solo effort with no established infrastructure, and I knew that going in. Even still, it took more than I expected.
Before getting into why I made the scoring adjustments I made, here's some stats on the puzzles themselves.
Posted by Jeffrey at June 10, 2021